Here I’ll just quote some definitions concerning different types of recombination, and get back with details later.

For a general classification we take a look at Kwan-Chi Kao’s book “Dielectric Phenomena in Solids“.
Looking for monomolecular recombination, we find

END_OF_DOCUMENT_TOKEN_TO_BE_REPLACED

It seems that one prominent discussion in organic photovoltaics has officially ended, the one about the primary photoexcitation in disordered organic solar cells being excitons (with a binding energy clearly above 100meV) or free charges (with excitons having binding energies in the range of the thermal energy, i.e. <<100meV). Hwang, Moses and Heeger, have just published a paper on polymer:fullerene blends [Hwang 2008] where they describe the charge generation as

Mobile carriers are generated via a two-step process: initial ultrafast charge separation to an intermediate charge transfer (CT) bound state, followed by the transfer of carriers onto the bicontinuous networks.

[…] indicating ultrafast dissociation of the singlet excitons at the polymer-PCBM interface and the build-up of the initial CT state.

The paper is nice but in itself not that remarkable, except that previously, Moses and Heeger always claimed the primary photoexcitation to be free charges instead of bound excitons. Their measurements yielded exciton binding energies in the range of the thermal energy, i.e., no donor acceptor interface being necessary for charge separation. To quote an older paper [Moses 2000],

Thus, carriers are photoexcited directly and not generated via a secondary process from exciton annihilation.

Now I have to mention that in the new paper they use P3HT:PCBM, and in the old one MEH-PPV:PCBM. But as they do not mention this in the new paper, I assume that either I missed something, or they changed their point of view concerning the primary photoexcitation.

Ideally, tandem solar cell made of a series connection of two subcells work as follows. 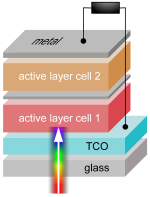 Both sub cells generate their own photocurrent by absorbing light and generating charges (as described for single layer cells in here), and have their own open-circuit voltage. Of course, as the two cells are connected in series, they influence each other. The photogenerated holes of cell 1 are extracted by the ITO, but where to the electrons go? They have to recombine with photogenerated holes from cell 2: that is what the intermediate recombination layer is for. If the photocurrent of sub cells 1 and 2 is initially unbalanced, the electric field is redistributed, such that the photocurrent becomes balanced… at a lower value, approximately determined by the worse of the two cells. The open-circuit voltage is aproximately the sum of both sub cells’ open circuit voltages. Of course, in cases of field redistribution, that does not quite hold true. So, what approximately happens in a tandem solar cell of subcells 1 and 2:

So for an ideal tandem solar cell, complementary absorption ranges, and balanced photocurrents are needed.

END_OF_DOCUMENT_TOKEN_TO_BE_REPLACED

In order to improve the power conversion efficiency of organic solar cells, novel donor and acceptor materials will have to be synthesised. 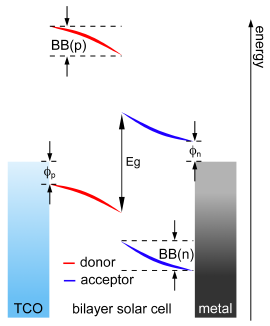 Properties looked for are the ability to self-organise – enhancing order and thus charge transport – and an absorption spectrum as wide as possible, being one of the major limiting factors as of yet. Nowadays, in most cases only the donor material absorbs light efficiently; an absorbing acceptor has a large potential for increasing the photocurrent. Additionally, by a variation of the relative energy levels of donor and acceptor material, the energy loss due to the electron transfer can be minimised: For light absorption in the donor, it is hoped that if the energy offset between donor LUMO (lowest unoccupied molecular orbital) and acceptor LUMO is a tiny bit larger than the exciton binding energy, a positive impact on the open-circuit voltage will be seen.

In the figure, the schematic energy level diagram of a bilayer solar cell is shown. The anode is made of TCO (transparent conductive oxide), then follow donor and acceptor, and finally the metal cathode.

The exciton is photogenerated in the donor, which can diffuse to and dissociate at the interface to the acceptor. The resulting polaron pair then is energetically separated by the effective band gap of the organic solar cell, Eg.The smaller the LUMO-LUMO offset & – which still has to be larger than the exciton binding energy – the larger Eg: the open circuit voltage is maximised, as it equals Eg minus band bending BB and the injection barriers phi [Cheyns 2008].

END_OF_DOCUMENT_TOKEN_TO_BE_REPLACED

In the beginning 90s, a novel concept was introduced, accounting for the low exciton diffusion length in disordered organic semiconductors, as well as the required

thickness for a sufficient light absorption: the so-called bulk heterojunction solar cell [Heeger 1995]. This approach features a distributed junction between donor and acceptor material: both components interpenetrate one another, so that the interface between them is not planar any more, but spatially distributed. It is implemented by spincoating a polymer:fullerene blend, or by coevaporation of conjugated molecules. Bulk heterojunctions have the advantege of being able to dissociate excitons very efficiently over the whole extent of the solar cell, and thus generating polaron pairs anywhere in the film. The disadvantage is that it is somewhat more difficult to separate these polaron pairs due to the increased disorder, or that percolation to the contacts is not always given in the disordered material mixtures. Also, it is more likely that trapped charge carriers recombine with mobile ones. However, the positive effects outweigh the negative. END_OF_DOCUMENT_TOKEN_TO_BE_REPLACED

As an in-between, we’ll talk about a topic which will hopefully become more and more recognised by the organic photvoltaics community: the shortcomings of the established Shockley model,

made for crystalline inorganic diodes, when applied on fitting organic solar cells.

The most important figures of merit describing the performance of a solar cell are the open circuit voltage, the short circuit current, the fill factor and the (power conversion) efficiency. The fill factor is given by the quotient of maximum power (yellow rectangle in the figure) and the product of open circuit voltage and short circuit current (white rectangle); it therefore decribes the “squareness” of the solar cell’s current-voltage characteristics. The efficiency is the ratio of maximum power to incident radiant power – typically radiated by the sun. E.g., a well-known detailed balance calculation for inorganic single gap solar cells gives a theoretical maximum of about 30% power conversion efficiency [Shockley 1961]. The upper limit for organic solar cells is somewhat lower, but that’s another story.

END_OF_DOCUMENT_TOKEN_TO_BE_REPLACED

The first organic solar cells where based on an active layer made of a single material. By the absorption of light, strongly Coulomb-bound electron hole pairs where created, singlet excitons. As described in part zero, these have to be split in order to finally generate a photocurrent. In order to overcome the binding energy, one has to either hope on the thermal energy, or dissociate the exciton at the contacts. Unfortunately, both processes have a rather low efficiency: under normal conditions, the temperature is not high enough, and the sample thickness is much thicker than the exciton diffusion length.

The consequence: excitons are mostly not dissociated, but recombine instead. This leads to luminescence, and light emitting solar cells do not belong to the most efficient… there is just not enough current output.

The introduction of a second layer was a quantum leap in terms of power conversion efficiency (though still on a low level): organic bilayer solar cells, presented in the mid eighties [Tang 1986]. The light is usually absorbed mainly in the so-called donor material, a hole conducting small molecule. The photogenerated singlet excitons now can diffuse within the donor towards the interface to the second material, the acceptor, which is usually strongly electronegative. A prominent example for an electron acceptor material is the buckminsterfullerene (C60).