Almost a year ago, I already discussed the photocurrent in organic bulk heterojunction solar cells. Also, recently I posted about the difficulties to determine the dominant loss mechanism from the short circuit current density dependence on the light intensity. 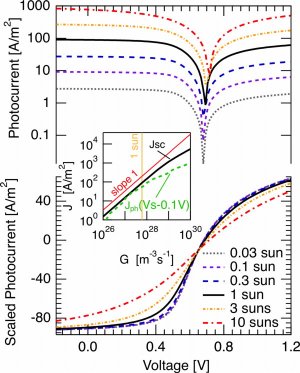 The figure to the right contains the simulated photocurrent for a bulk heterojunction solar cell of 100nm thickness at room temperature. Parameters were chosen according to typical experimentally determined values for P3HT:PCBM solar cells: Bimolecular Langevin recombination with a reduction factor of 0.1 and electron and hole mobility of 10-4m2/Vs were assumed (is it possible I never discussed this reduction really? Seems so, just mentioned it with references here). The top graph shows the photocurrent, in the lower graph the photocurrent was divided by the illumination density in terms of suns (thus, the current densities given on the y-axis are only correct for 1 sun). Consequently, if the photocurrent scales linearly with the light intensity, all curves should coincide. Let me remind you that this was interpreted by different groups (Street et al. among them, but not the first to follow this explanation) as a sign of first order recombination.
END_OF_DOCUMENT_TOKEN_TO_BE_REPLACED