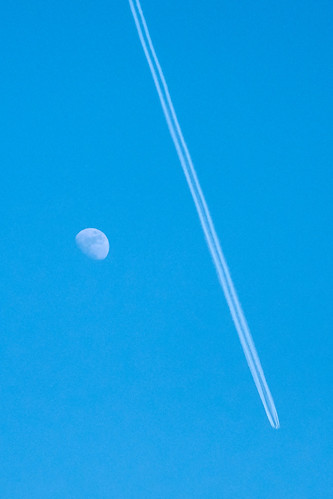 Even a very good real solar cell does not exactly follow the Shockley equation as stated at the beginning. Contact resistances and small shunt currents flowing from electrode to electrode in parallel to the diode (i.e. without rectification) have to be considered. These effects can be approximated by considering a series resistance

and a parallel (shunt) resistance

That means, the internal voltage at the solar cell is reduced by a voltage drop across the series resistance, and the diode current is essentially superpositioned on a shunt current. Here, indeed, the dark current in reverse voltage direction is not

If we again look at what happens for

is “measured” without current flow, so the series resistance does not apply. (Note, although pretty evident I think: all figures in this post show calculated data, not measurements!) However, the shunt resistance still does! Nevertheless, this implies that while the ideality factor determination from the dark current–voltage characteristics under real conditions is limited by series and shunt resistance, the method using (

) pairs is at least not limited by the series resistance! This can also be seen when comparing the dark current-voltage characteristics for an internal voltage

with the same current plotted at the external voltage

, which is reduced compared to the internal one by the (series) resistance. As shown in the figure, the fill factor for a measured device (which happens always with the applied voltage, of course;-) is clearly lower as compared to the one plotted against the internal voltage. However, the (

) pairs (in the figure approximated by (

) are not limited by the (series) resistance and therefore show the higher fill factor.

Similarly, ideality factor should be determined with the (

in the figure, which corresponds to the “reference” for the internal voltage

) and not from the dark characteristics

. Often less extreme overestimation, but just the same: do not do it;-).

So, what’s next. I plan to write two more posts on the ideality factor, one on its relation to the recombination rate, and one the transport resistance (see recent papers by [Würfel/Neher et al 2015] and [Neher/Koster et al 2016].

P.S. Not only finding time to write a blog post is more difficult these days: I have been taking only photographs of my kids – which I do not post on the internet – since 2011, but almost no nature or architecture photographs. Thus, not much to lighten the text and equations, but also less distractions ;-)